For a long time profiling Ruby apps sounded like a low-level endavour to me. Performance-critical algorithms or C-level stuff - that’s where it shall shine. An excellent example was the discussion about slower boot time in macOS. But can it be helpful to achieve a high-level overview of problems in a very complex codebase, such as a Rails app? I thought not - all the HTTP things, database calls, framework internals would make the output illegible and useless. Well, I was wrong. With the right set of tools, you can get a good grip of what’s happening inside your application. Even better than by code analysis and random benchmarking. Here’s what I learned during last 8 months or so.

I picked Consul as an example on which I’m going to work. It’s a fairly big open-source Rails application for citizen participation. I was working on a pull request to consul some time ago and doing that I noticed something I thought was weird. Let’s take at a look at a simple test like this:

It takes almost 10 seconds to run it. More than six seconds out of it are spent is setup phase, but the spec itself takes more than 3 seconds. Something’s fishy here and let’s see what!

Why care? Imagine working on something and having to run tests every time you change something. Waiting 10 seconds every time is a real buzzkiller.

To find out we are going to use two tools:

For the setup, assuming you have already cloned Consul and bundle install‘d:

If everything went OK, you should see a somewhat intimidating image like this: 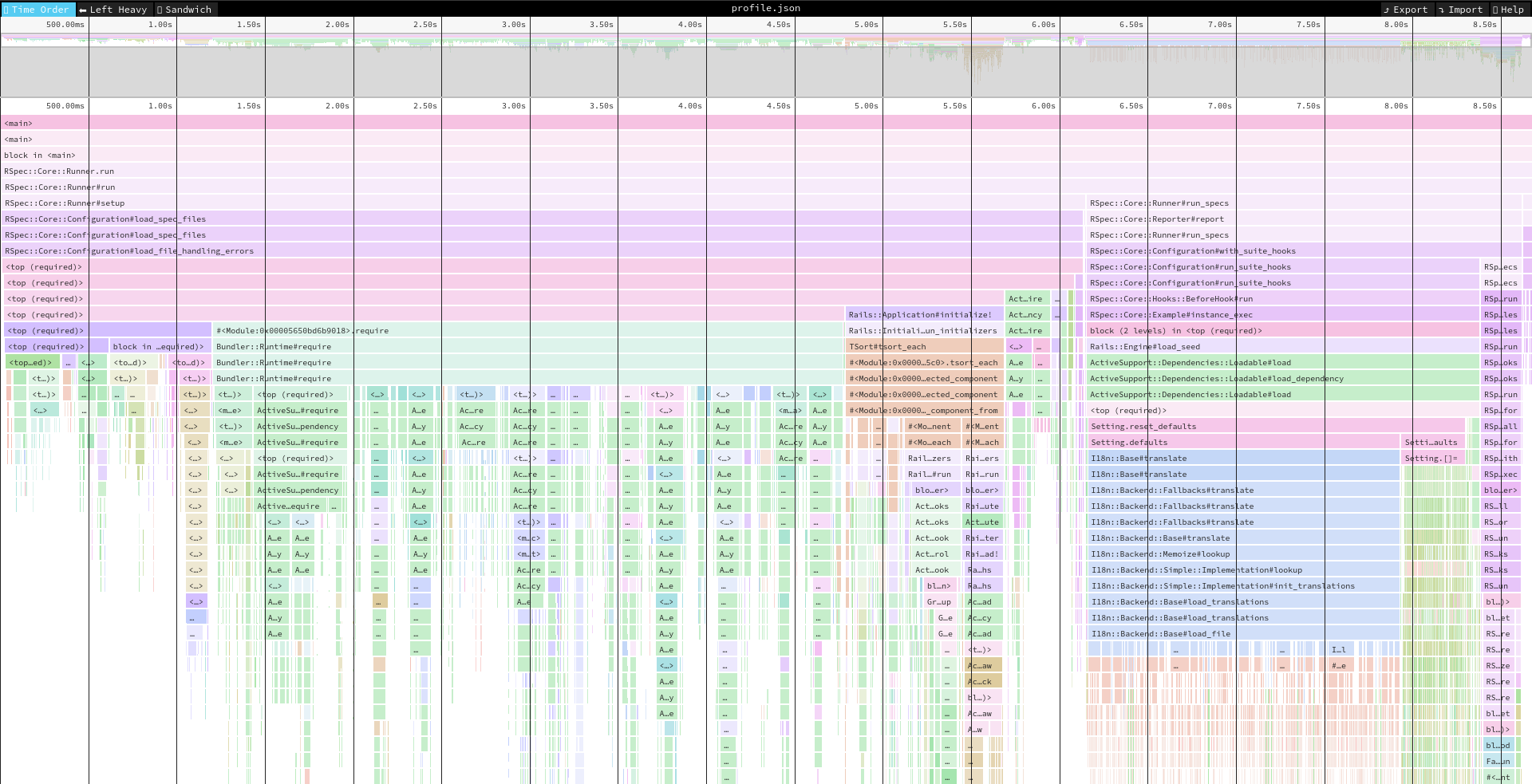 What is here? First of all, it is a timeline. On the top you can see that everything took less than 9 seconds. This is more or less equal to what we’ve seen earlier when we ran the test. The blocks are units of code (basically functions). The ones that are higher in the stack are more general. What happens in them is broken down in lower lines.

Going from the top, first few lines are useless, because they span the whole timeline. It’s the most general level, which you can tell by the label <main> on them. Below we have some RSpec functions, also spanning the whole timeline. But after them things are getting a bit more interesting. We can see that the line has been split into two blocks. First one says RSpec::Core::Runner#setup and you can see it took a bit more than 6 seconds, while the second is RSpec::Core::Runner#run_specs. Judging by the name, you could say that those are preparations for running the test suite and actually running it.

If you compare with output from RSpec (Finished in 3.16 seconds (files took 6.28 seconds to load)) you should notice that these are the same numbers of seconds.

For now, we don’t want to look at the setup part, after all we are interested what takes so long in a test itself. If you double click on RSpec::Core::Runner#run_specs, speedscope will zoom in on it, so we can see better what’s inside:

You can see the same pattern. The top lines span the whole screen width (that’s what we wanted) and then in the 5th line it splits into two parts. The shorter one on the right has its label clipped, but if you hover on it, you can see it says RSpec::Core::Runner#run_specs. This is an actual execution of the spec. The large part on the left is the preparation work. Further down we can see some labels that look familiar (RSpec::Core::Hooks::BeforeHook#run, Rails::Engine#load_seed) and other are just pure technical rubbish (examples are ActiveSupport::Dependencies::Loadable#load, which is just ActiveSupport’s black magic). You’ll have to learn to ignore the rubbish and look further down immediately in search of meaningful blocks.

The <top (required)> label means that some Ruby file was loaded. When you click on it, the “stack console” will open up on the bottom of the screen. You can check which file we are talking about there:

After this line we finally see a block created by code in our Consul app! The Setting.reset_defaults took 2.15 s to run, and below you can see that 1.78 s was spent in Setting.defaults and 370 ms in Setting.reset_defaults (again). This is the time to look at the code. But before that, let’s notice that almost 100% of defaults is spent in I18n. We are going to use that fact.

In speedscope we’ve seen two blocks for those methods and there are also two parts here. One is calling defaults and it takes 80% of the time. The other is each + block - 20% of time. It’s obvious by now that the main problem lies in defaults method. This method, however, it simply returning a super-long hash with string keys and some values. Should it take so long? No, of course not. If you know what to look for, you’ll find these lines:

Now we can make an educated guess what the problem is. When the hash is created, it calls I18n.t to set a couple of values. This triggers all Rails’ heavy autoloading machinery, loading YAML files with translations and then evaluating them. Consul is translated into many languages and has a lot of strings. Loading all of them must take some time.

After a quick session of grepping around I found that Setting.reset_defaults is used in three contexts:

The first two usages need access to translated string, otherwise it would look stupid to set up a website in Spanish, but get English official names in it. However, for testing purposes we can afford to not care too much and just put some random string, not correct translations (we are using default locale anyway). Let’s change it in this fashion:

And the result is:

Good! We went down more than 2 seconds compared to the original run, from almost 10 seconds to just above 7.

Where to go from now?

This is just a start and by analyzing the profiling results you surely can get some more savings. Here’s updated screenshot from speedscope with some annotations:

The list could go on and I’m sure that with some work we could have our single test be running in under 5 seconds, which is half of the time we have at the start.

When I showed you a script to perform profiling, there was GC.disable in it. Why? Because in large app garbage collection happens often, making the resulting image illegible and hard to reason about:

Remember though that in reality you run the app with GC enabled. While for investigation reasons it’s good to disable it, you should check how it looks with GC enabled too. There are two others speedscope views that can help you here.

First one is a “sandwich view”. This is more or less what we know as the result of profiling. It contains summed up values for each method call, ordered by “self time” (i.e. time spent in the function itself, not in the functions called by it).

We can see here that garbage collection took just a bit over half a second. This is quite a lot and maybe tuning the GC in development would also positively affect the performance.

The other is “left heavy” view. I don’t use it a lot (although I probably should), so I’ll let the author of speedscope explain:

In the “Left Heavy” view, identical stacks are grouped together, regardless of whether they were recorded sequentially. Then, the stacks are sorted so that the heaviest stack for each parent is on the left – hence “left heavy”. This view is useful for understanding where all the time is going in situations where there are hundreds or thousands of function calls interleaved between other call stacks.

This is how it looks for our Consul test. It’s still a good way to see what calls what and wthe time is spent. But this is not a timeline anymore, so it’s less helpful in understanding the lifecycle of your code.

This article was written by Paweł Świątkowski on 03 May 2020. You can follow me on Twitter if you want.