Ruby Rampage is a 48h Ruby-based online hackathon, previously known as “Rails Rumble”. And it just happened last weekend. For me, this was fourth time to participate in it and for the first time and want to share some thoughts about it right away.

About the hackathon itself

Ruby Rampage, just like its predecessor, does not have any theme or topic. It has just one technical constraint: all entries have to be a Rack-based web application that can de deployed to Heroku instance. It is also online, which means that contestants are expected to show some kind of uprightness and not code before it starts or have more members on the team that it’s allowed. It is generally a fun event, not a serious business.

That being said, I noticed few flaws on that idea:

Only this year it struck me that it is not exactly the same for people in different time zones. For Poland, it starts at 2AM on Saturday, which is basically to late to start coding. You have to wake up early on Saturday morning, then you have whole day of coding, some sleep, and a very long Sunday, which finishes at around 3AM. And next day you are going to work.

It is quite different for people who start e.g. Friday at 6PM. They can bootstrap their project, overcome some initial problems, have some rest. Then they have one full day of coding, time to get some sleep and then half a day to finish. They can even hit a bar afterwards!

Of course, there is probably no way to mitigate this, but maybe because I could monitor people activity on Slack this year, it came as a realization.

One thing that wasn’t exactly fair this year was that we could only use free addons on Heroku. This was quite different from last years, when first tiers of paid services were provided for free for contestants and there was no warning in the rules about that. Halfway in the first day we realized that we have PostgreSQL instance in which we can keep only 10K records, compared to 10MM last year. Fortunately, organizers provided us with alternative solutions (using Compose.IO, although it only happened for us on Sunday afternoon).

Is there any Ruby in it?

More and more entries are basically front-end applications which have close to nothing on a backend. While they are technically correct, this does not have much in common with Ruby theme. I have a bit mixed feeling about this, but then again: there’s probably nothing to prevent this.

As I said before, this was fourth Rumble/Rampage for me. As it happened, we tend to have a cycle in what we build:

We ended up with an app with 10 models, 15 controllers and 10 service objects, which is quite a lot as for 48-hours-long hackathon in my opinion. QuestFlow was born. 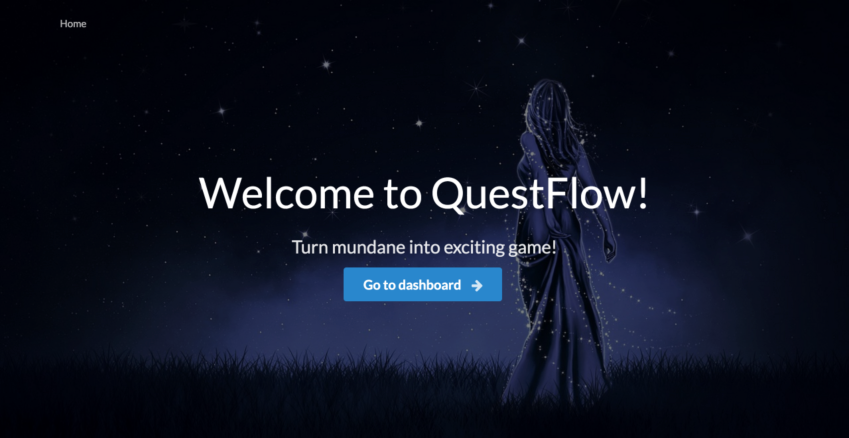 The initial idea was to turn checklist-like sets of task (such as onboarding process) into something fun, where you can both report your progress (as for example new employee) and track the progress (as their supervisor). Therefore instead of todo items we have quests grouped in flows – now you know where does the name come from.

As an addition there are achievements. They are designed as arbitrary reward: for example for giving a talk in a local Ruby users group or coming up with an idea that is vital to business. On top of that there are experience points and levels.

Now we wait for judgement to finish and we also rate other people’s entries. If you want, you can see our entry here. By the way, the name of our team (Beer Driven Development) is very misleading as, unlike previous editions, we did not drink any alcohol during the contest ;) 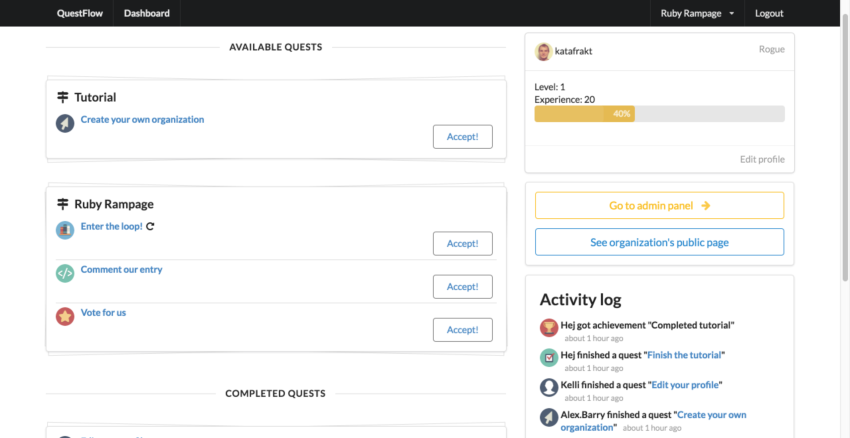